A new baby is sitting on my desktop: yesterday arrived the MSP430 powered Launchpad development board.  These few notes describe the steps I did to setup a development environment for this board on Ubuntu Linux 12.04 LTS 64bit.

Update: at the beginning of March 2012 TI raised the price of LaunchPad board to 10 $ shipping included. The launchpad board is a low-cost (less than 5 € shipping included) development board based on Texas Instruments MSP430 family microcontrollers, it ships in a nice retail box with two different MCUs, an USB cable and a tiny 32KHz smd crystal ready to be soldered onto the board (you don’t normally need it for the basic operations), the software stack is a gcc backend and a clone of the Arduino IDE and libraries. This stack makes the switch from Arduino environment very easy. The Arduino-like libraries are named Energia and can be downloaded as pre-packaged binaries from http://energia.nu/download/ or from the GitHub repository: https://github.com/energia/Energia The community is still smaller than the huge Arduino community but it is growing fast, you can find a couple of useful links at the end of this article. 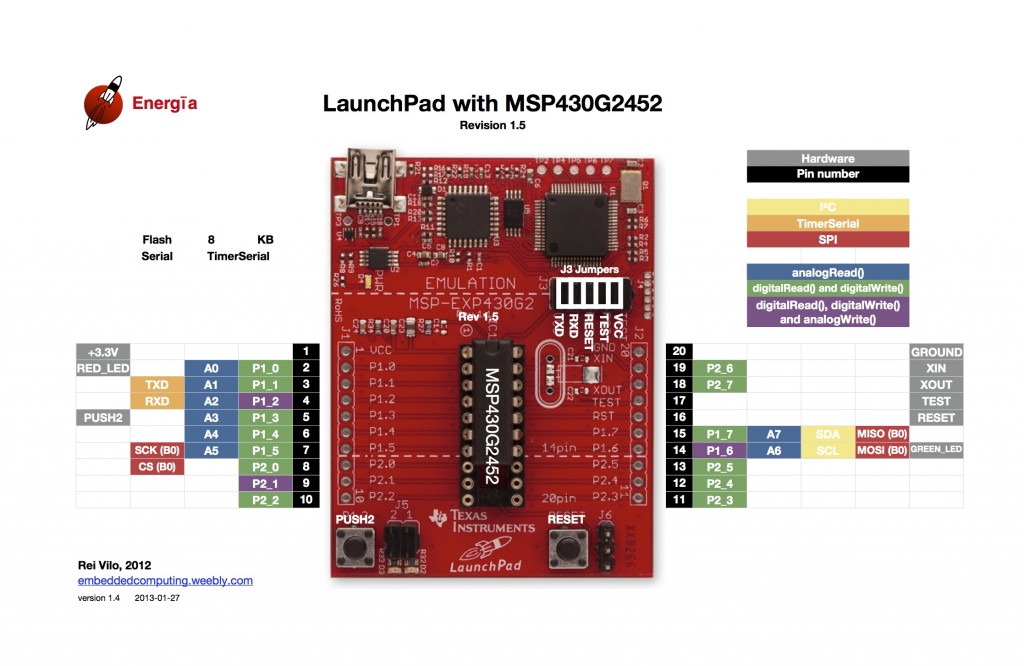 Some “shields” compatible with LaunchPad are also available on TI store, particularly interesting the capacitive and audio shields, that add a touch interface and MP3 recording/playback capabilities to the device. For an overview of the available LaunchPads, see http://www.ti.com/ww/en/launchpad/overview_head.html

The intent of TI when they launched their development board was clearly to follow and exploit the huge success of Arduino, this paragraph will attempt to shed some light on similarities and differences of Arduino and LaunchPad+Energia.

The Launchpad board is  shipped with two different MCUSs: MSP430G2553 and MSP430G2452, they are both 20 pin devices but the 452 has half the flash and RAM of the 5523. Comparing MSP430 and Atmega328P is just like comparing apples and oranges but we can try to summarize tha main differences: What we can tell for sure it that Atmega328P beats MSP430G2553 in Flash and RAM size, but where MSP430 is clearly superior is: On the contrary, Arduino compatible shields,  community and software libraries are far ahead of MSP430/Energia.

First you need to install the compiler packages: If you plan to use the Energia libraries which provide an Arduino-like environment, you should download the package from http://energia.nu/download/ and install them in a subfolder of your home directory, I installed them in a folder named “energia”. To hold my sketches and libraries, I also created a folder named “energia_sketchbook”. To summarize the steps: to access the serial port, you also need to add some udev rules: and then restart udev by: An additional step is required if you are on a 64bit architecture: After doing this, you should be able to launch the Energia IDE with

I’m the kind of programmer that hates complicated IDEs, moreover I can’t suffer Java(TM), for this reason I tend to use Makefiles to compile MCU code and the first thing I did was to setup a development environment using a Makefile to do all the compilation, linking and upload stuff. This Makefile is freely adapted from the good job done by Tim Marston at http://ed.am/dev/make/arduino-mk   You can download the latest version of the Makefile from my repository: https://github.com/elpaso/energia-makefile The Makefile must be launched from within the directory containing the sketch you want to compile, the name of the directory must be the same name of the main sketch file which has the Arduino “.ino” file extension. A couple of environment variables are used to instruct the Makefile where the libraries are located and to build code for the correct MCU (for a complete list of config vars, please refer to the Makefile itself, they are described in details in the header), you can set them once for all using .bashrc:

You are now ready to test your new Launchpad, the “Hello World” program for MCUs is the classic Blink program, which just blinks one of the two leds available on the board, you can just copy the example provided with the Energia IDE: You now need to connect the board to your PC with the provided USB cable. If everything went fine, you will see a nice blinking led at 1Hz on your Launchpad board.

The board has onboard USB-to-serial logic, but I had a really hard time before I could use it, and it’s still somewhat unstable. UPDATE: there is now a nice method to fix the serial problem: https://github.com/capnm/LaunchPad Basically, there are some problems with the acm_cdc driver provided with latest Ubuntu kernels, I could make it work following the instructions on https://github.com/energia/Energia/wiki/Linux-Serial-Communication More info in this post (and previous pages): http://e2e.ti.com/support/low_power_rf/f/156/t/53610.aspx?pi239031349=3 You will need to compile a patched kernel module named cdcacm (the stock module is called cdc_acm), and you mileage may vary, after compiling and loading the patched module I was able to read from serial just doing: Sometimes I still need to unload and reload the module with:

Arduino and Energia differs too much, but I think they are both interesting devices, given the very low price of MSP430 and the Arduino-like development environment I feel that I will be using this MCUs wherever I can as long as I don’t need much flash and RAM. Flash, RAM, community, libraries and examples are what make Arduino great, let’s see if Energia community will grow  fast and if TI will release more powerful MCUs for this interesting development board.