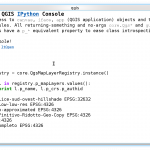 Whatever is your level of Python knowledge, when you’ll discover the advantages and super-powers of IPython you will never run the default python console again, really: never! If you’ve never heard about IPython, discover it on IPython official website, don’t get confused by its notebook, graphics and parallel computing capabilities, it also worth if only used as a substitute for the standard Python shell. I discovered IPython more than 5 years ago and it literally changed my life: I use it also for debugging instead ofpdb, you can embed an IPython console in your code with:

What I like the most in IPython is its TAB completion features, it’s not just like normal text matching while you type but it has full realtime introspection, you only see what you have access to, being it a method of an instance or a class or a property, a module, a submodule or whatever you might think of: it even works when you’re importing something or you are typing a path like in open('/home/..... Its TAB completion is so powerful that you can even use shell commands from within the IPython interpreter!

Full documentation is just a question mark away

Just type “?” after a method of function to print its docstring or its signature in case of SIP bindings.

IPython special functions are available for history, paste, run, include and many more topics, they are prefixed with “%” and self-documented in the shell.

All that sounds great! But what has to do with QGIS?

I personally find the QGIS python console lacks some important features, expecially with the autocompletion (autosuggest). What’s the purpose of having autocompletion when most of the times you just get a traceback because the method the autocompleter proposed you is that of another class? My brain is too small and too old to keep the whole API docs in my mind, autocompletion is useful when it’s intelligent enough to tell between methods and properties of the instance/class on which you’re operating. Another problem is that the API is very far from being “pythonic” (this isn’t anyone’s fault, it’s just how SIP works), here’s an example (suppose we want the SRID of the first layer): TAB completion stop working at the first parenthesis 🙁 What if all those getter would be properties? This works with a quick and dirty hack: propertize that adds a p_... property to all methods in a module or in a class that this leaves the original methods untouched (in case they were overloaded!) still allowing full introspection and TAB completion with a pythonic interface.
A few methods are still not working with propertize, so far singleton methods like instance() are not passing unit tests.

If you’ve been reading up to this point you probably can’t wait to start using IPython inside your beloved QGIS (if that’s not the case, please keep reading the previous paragraphs carefully until your appetite is grown!). An experimental plugin that brings the magic of IPython to QGIS is now available:
Download IPyConsole   Please start exploring QGIS objects and classes and give me some feedback! 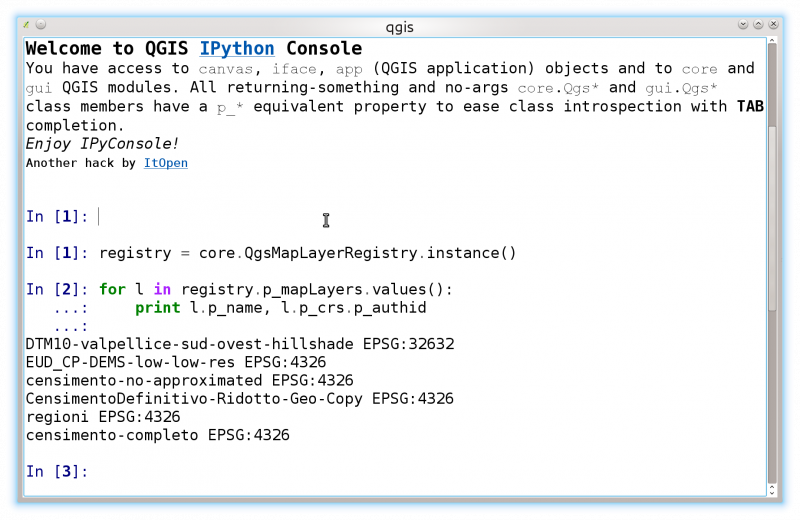 You basically need only a working IPython installation, IPython is available for all major platforms and distributions, please refer to the official documentation.
It's only fair to share...

7 Responses to “QGIS and IPython: the definitive interactive console”